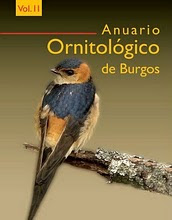 The new edition of the Ornithological Yearbook of Burgos Vol II has supposed the consolidation of this great project, and doubtless it locates to the of Burgos ornithology like one of best of Spain. This new volume concentrates in the records of years 2006, 2007 and 2008 with 3,700 accepted records, 250 collaborators, 256 species in this yearbook of the 313 recorded in Burgos, have confirmed the reproduction of three new species in Burgos, Black Wheatear, Black Woodpecker and Siskin.

Hot spots in Burgos, water reservoir of the river Ebro and gravel pits of Grijalba and Suzana.