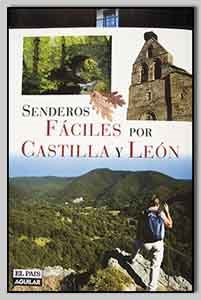 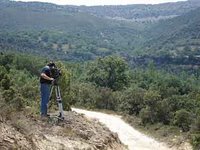 week the TVE (Spain television) is been recording an interview, in the Inn, the author of the book “SENDEROS FÁCILES POR CASTILLA Y LEÓN“, Javier Prieto, a book on routes and ways of Castile and León .

Among the outstanding routes one is a very near one the Molino del canto Inn, the one that runs by the Canyon “Los Tornos”, and that begins in the village of Tudanca.
In a future post I will describe this route of detailed form more.
It is a section of the GR85 that crosses great part of the north of Burgos province. 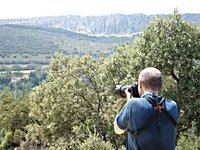 They have arrived at the zone to take images from the route for the small accomplishment from a documentary one, and have made some interviews, a pair of them to the own author of the book and another they did me my, in relation to the species of birds that live and that can be observed in this zone of the north of Spain.
The birds that could be observed during the route, were mainly Griffon Vultures (Gyps fulvus), although also the rest of the species was seen an Egyptian Vulture (Neophron percnopterus), were forest, Tits, Wagtails, Western Bonelli’s Warbler (Phylloscopus bonelli), but it is already very evident that the birds have been stop sing as intensely as for some weeks, now easiest to see and to listen it is to great amount of young birds of different species, persecuting from the parents so that they give food them.
By this it is a good moment to be able to observe the different types from plumage that have the birds with youthful age, sometimes very different from the plumage of the adults.