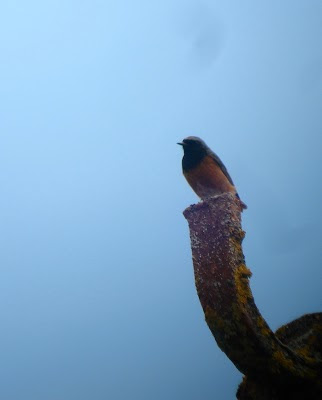 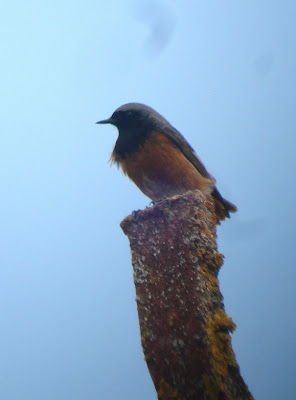 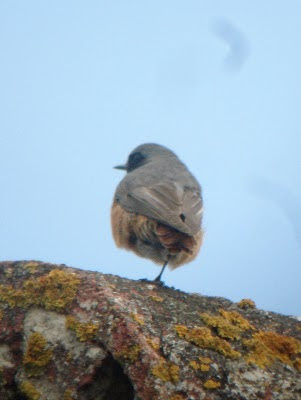 Discovered the last year in Dobro (More in Birds in the North of Burgos), the analysis of the photos determined the security almost that it is a hybrid of Common Redstart X Black Redstart.

The song of this bird is very similar to that of pure Common Redstart, not listening to the characteristic final note of Black Redstart, opposed to the exposed in the book Handbook of avian hybrids of the world

Hybridization between redstart Phoenicurus phoenicurus and black redstart P. ochruros, and the effect on habitat exploitation

Although redstarts Phoenicurus phoenicurus and black redstarts P. ochruros breed in different habitats they have been found to interbreed and to produce viable and fertile offspring, which backcross to the parental species. In a dual choice experiment, I investigated the preference of black redstarts and redstarts, and F1-hybrids for different habitat structures in an aviary. Black redstarts strongly preferred a perch type on which they could stand to a perch they had to cling to. Redstarts were less selective and used both perch types equally as long as food was offered between both perches on the ground. If food was given at one of the perches redstarts changed their preference depending on food location. Black redstarts, however, showed only a slight response. They always preferred the same perch type. Hybrids behaved like redstarts. They did not show a preference as long as food was placed on the ground. When food was offered at one of the perch sites they more often chose the one with food. Due to high phenotypic variability among individuals perch type preference overlapped between the three experimental groups.

Natural Spain through his blogs, a brief entry about Spain and some natural blogs. Nature Blog Networking: ¡Viva España!