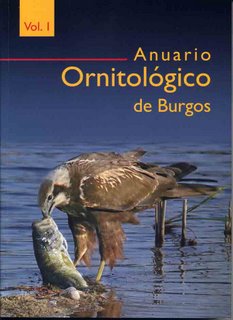 One of the most interesting projects on the birds in Burgos has been finished.
The Ornithological Yearbook of Burgos has published the Volume 1, an historical revision from the publication of the Breeding Bird Atlas of the Province of Burgos.
In this first volume, several years are included until the 2005, updating the data of the Atlas with respect to the breeding Birds.
Also one adds all the information available on the rest of species, migrate birds, wintering birds and rare birds.
With this a study of 299 species of birds is completed that of a form or another one have been detected in the province of Burgos.
Of each species his is indicated the status and the population esteem, to date of 2005, being able to compare with the reflected one in the Atlas of 1996, the most showy records and its situation comments.
Of some species a evolution graph is contributed and others with a small map of distribution.
In the end four works are contributed about the birds in Burgos, about the Dupon´s Lark (Chersophylus duponti), White Stork (Ciconia ciconia), Black-winged Stilt (Himantopus himantopus) and Lesser Kestrel (Falco naumanni). 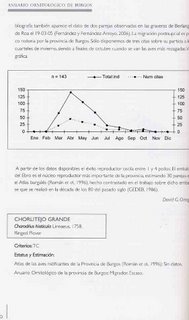 Graphics and Maps for some specie 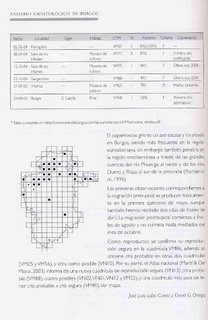 All the work of the Yearbook, also this available in the Web, in :

With the following mails, you can buy the book.

Thank you very much to the coordinators (David Gonzalez Ortega, Fernando Román Sancho, Rufino Fernández González y José Luis Lobo Cueva) by the work that, without a doubt, will benefit the birds from our province.

My second square- VN 3040– for the Breeding Bird Surveyhas reported a total of 48 different species of birds, a number similar to other…