Although the weather has not been very good, we have made a new visit to the reservoir of river Ebro.
The objective, to see if there were Eurasian Spoonbill (Platalea leucorodia) or some specie of Goose in migration, we were not able to see none.
Even so from the observatory, located near of city of Reinosa, we have seen several species, some of them in numerous groups, like the dispersed groups of Sky Lark (Alauda arvensis)
, and in the river a group of 53 Black-headed Gull (Larus ridibundus)
An eight Northern Lapwing (Vanellus vanellus) resting.
Several ducks, Eurasian Wigeon (Anas penélope) , two Pintail (Anas acuta) , quite Mallard (Anas platyrhynchos), and Common Teal (Anas crecca) .
Grey Heron (Ardea cinerea) up to six specimens.
A Eurasian Sparrowhawk (Accipiter nisus) in flight by the zone.
Five juvenile of Great Cormoran (Phalacrocorax carbo) .
But the showy thing was the presence of Yellow-legged Gull (Larus michahellis), that although this fact is quite normal, the unusual thing was to see two birds, one of them with the own characteristics of the species and an adult, but the other with all the plumage of an adult, except very tenuous dark feathers, in the auricular zone, and the difference had in legs and bill, greenish legs, at no moment with clear tonality and the bill with a black spot a little greater than the red spot that has the adults. 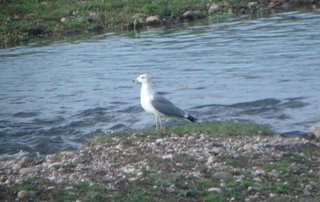 After reviewing bibliography and receiver the answer of Xabi Varela , I draw a conclusion at that is a Yellow-legged Gull (Larus michahellis) of possibly was a four-winter or subadult, with the plumage already from adult but having conserved coloration from a third winter, in legs and bill. 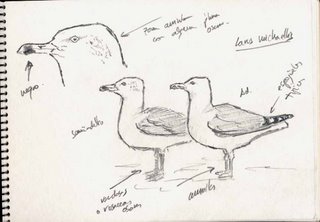 Tree Pipit    Zamanzas Valley The first idea was go through the Cañones del Ebro y Rudrón  P. N. and continue to the Ebro…