When we thought on the songs is at night logical to think about the Olws, but also there are other species of birds that in spring sing at night.
But famous bird singing nocturnal is the Rufous Nightingale, but it is possible to listen to other singers.
The last night at four in the night a Cetti´s Warbler was singing, but with differences on its typical song, song four times and only in one of them the song finalized, in the other three occasions only sang the first part of the song.
The birds are not too many that to sing at night and some of them it is easier to listen to them only at dawn or at dusk. This is a list of the birds that commonly can to listen in the north of Spain at sunset. 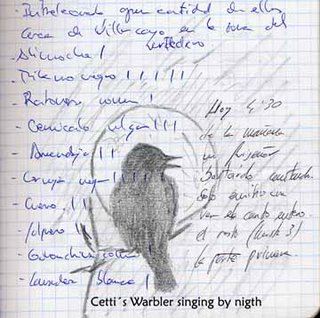