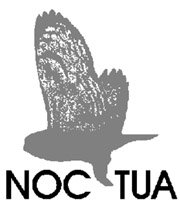 This week I have finalized the second visit, to the established route, of the
NOCTUA program.
This program, like SACRE, is included within the activities of pursuit of
birds of the Spanish Society of Ornithology .
In the case of the program NOCTUA, the birds that are pursuit object are
nocturnal, Owls and the Nightjars ones.
In the first visit (31/01/06), the detected birds were the nocturnal birds that they do
not make the migration, although of them only detected to Eagle Owl
and the Tawny Owl .
In this second visit already has been stated the arrival of some species that
emigrate, like Little Owl and mainly European Nightjar ,
located in the five listening posts.
It is not only easy to listen to his characteristic song, but also to see, mainly put
in roads and gravel road, in fact one of the names that receive in Spanish this
type of birds is “atajacaminos”, literally translated like “interceptroads”.
Like the SACRE program, this type of works helps to less know the situation the studied populations of birds, and in few years, the result of these visits, will give rise, to knowing if, eg., the population of Little Owl is lowering, raising or it stays, and thus with the rest of the species.
Unlike the SACRE program, the participation of ornithologists in this program is smaller, had mainly to the difficulty to make these listening at night.
Although it continues being necessary to begin at night, the methodology used now to changed, and substantially diminishes the effort that there is to make.
I animate to the ornithologists that they to carry out a programs.

The first Egyptian Vulture (Neophorn percnopterus) in the north of Spain, a pair the 20-02-2010, record by Juan Zaballa.Yearbook of Cantabria