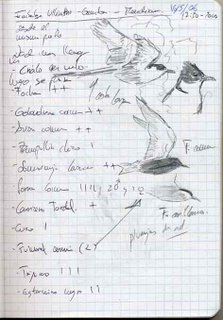 This week I have been able to enjoy the present birds in a natural space, created by the man, the reservoir of Ullivarri-Gamboa.
This reservoir is quite great and I was observing birds in one of its edge, near the of Mendixur Ornithological Park.
When being the closed park, and the inaccesssible observatories, I went directly to the village of Mendixur, that when high being, the observation of this zone of the reservoir is good.
When I arrived a bird from medium size cross flying the willows next to the water, the binoculars went quickly to the eyes to observe Great Spotted Cuckoo, bird that long time that it did not observe.
Birds, of slow flight, fly over to low height the surface of the water, the identification confirms, two Black Tern and two Whiskered Tern, with very similar behavior.
There are several abundant species, between the aquatic birds, the Coot and the Great Crested Grebe, of this are possible to be observed several pairs making the nuptial shutdowns, locating the one before other and making a series of symmetrical movements.
Other very abundant species, the Barn Swallow and the House Martin.
Five Purple Herons fly over the zone and two White Storks settle in trunks, one of them with rings, but I was not able to read the ring.
Another one of the observed showy species has been the Black-necked Grebe (4) and the Golden Oriole (1). 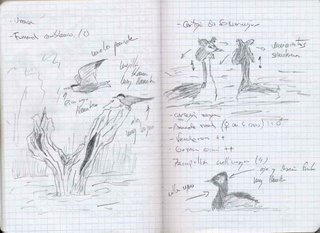 31 species !!!, this is a very recommendable zone for the observation of birds.

The excellent news, this time on a great mammal, the Bear.50 years ago the Bear left the north of Burgos. Now it has returned.A…